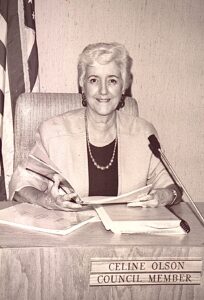 Celine Olson became a member of the first City Council of Solana Beach and the City’s fifth Mayor, after leading a years-long campaign for incorporation.

Celine was born on September 26, 1925 in Philadelphia, Pennsylvania to Edward F. Sweeney and Angele (Sauret) Sweeney. She graduated from John W. Hallahan Catholic Girls High School in 1943 and volunteered with the Navy League and sold war bonds in addition to working for AT&T as a draftsman. While doing her volunteer work in 1945 she met a dashing naval officer, Joseph C. Olson. They continued their relationship by exchanging numerous letters while he was at sea during the war and in May of 1946, they were married in the chapel at Naval Air Station North Island in San Diego.

Celine was a Navy wife for the next 17 years and raised five children while moving around to Philadelphia, Boston, Michigan, Washington, Japan and San Diego. While living in San Diego she became active in local civic affairs and was instrumental in saving the quiet neighborhood of Mission Hills from over development. After a total of about 25 years in San Diego and the kids mostly moved out, Celine and Joe decided to make Solana Beach their home in 1975.

Celine soon became active in the community and helped to save the canyon side overlooking San Elijo Lagoon near her home from development.  Her participation and activities included four years with the San Dieguito Citizens Planning Group; eight years with the Solana Beach Town Council, two as President; the Solana Beach Women’s Civic Club, where she championed the effort to create the Solana Beach Friends of the Library, serving as President in 1984, and helping make the new library a reality; a North County Transit Board District Director working on establishment of the new train station and the Coaster service; the Shoreline Erosion Committee; and past President (1994-96) and member of the Solana Beach Civic and Historical Society for many years. She was a staunch life-long Republican and proud member of the Republican Women’s Association.

Her proudest achievement aside from her family was as a leader in the effort to incorporate Solana Beach starting in 1979 which became a reality on July 1, 1986, serving as Council Member for four years and Mayor in 1992. She truly loved Solana Beach, her home of 45 years.

She loved to travel with Joe, whether by train, ship or automobile taking several cruises and visiting places like China, Scandinavia, Europe, Mexico, Hawaii, Alaska and the Great Northwest. She also loved to dine out including at Fidel’s and Tony’s in Eden Garden.

Celine was preceded in death by her husband of 63 years Joe in 2009, son Richard Olson (wife Raquel) of San Diego in 2017, and daughter Dianne Ray (husband Randy) of Hauula, Hawaii in 2018.

Celine Olson died of natural causes at her new home near Warrenton, Oregon on July 19, 2021 at the age of 95.  She rests at Fort Rosecrans National Cemetery with her loving husband.