It is one of the most iconic images of our community — along with Quonset rooflines and the enchanting ceramic mosaics that now book-end our City. The glowing pink neon Solana Beach sign has tagged countless sunset photos by locals and visitors.

The neon sign wasn’t erected to signify the City. Rather, it was raised likely in the mid-1950s as a glowing invitation to stay at the Solana Beach Hotel, which occupied the building on the Plaza at 101 North Acacia starting in 1925. The building was one of the first to be erected by Col. Ed Fletcher, and its rock buttresses remain today as they were built close to a century ago. Inside, the hotel provided 12 rooms, two apartments and five offices, one of which has been occupied by the Solana Beach Chamber of Commerce for decades.

In 1992, the 4-foot-tall, 20-foot wide sign was spared from demise by official designation as the cultural icon that it remains today. According to this January 9, 1992 report in the North County edition of The San Diego Union newspaper, officials in our relatively young, new City (incorporated in 1986) were dedicated to continuing the Society’s long fight against billboard blight. Roof signs (among others) had been outlawed by ordinance in July of 1991.

However, after hearing Solana Beach Hotel owner Al Childs’ protest, Council “adopted a criteria whereby culturally significant signs would be exempt from the new ordinance.” The Council also appointed an eight-member ad-hoc committee to oversee implementation of the roof-sign-ban rule. 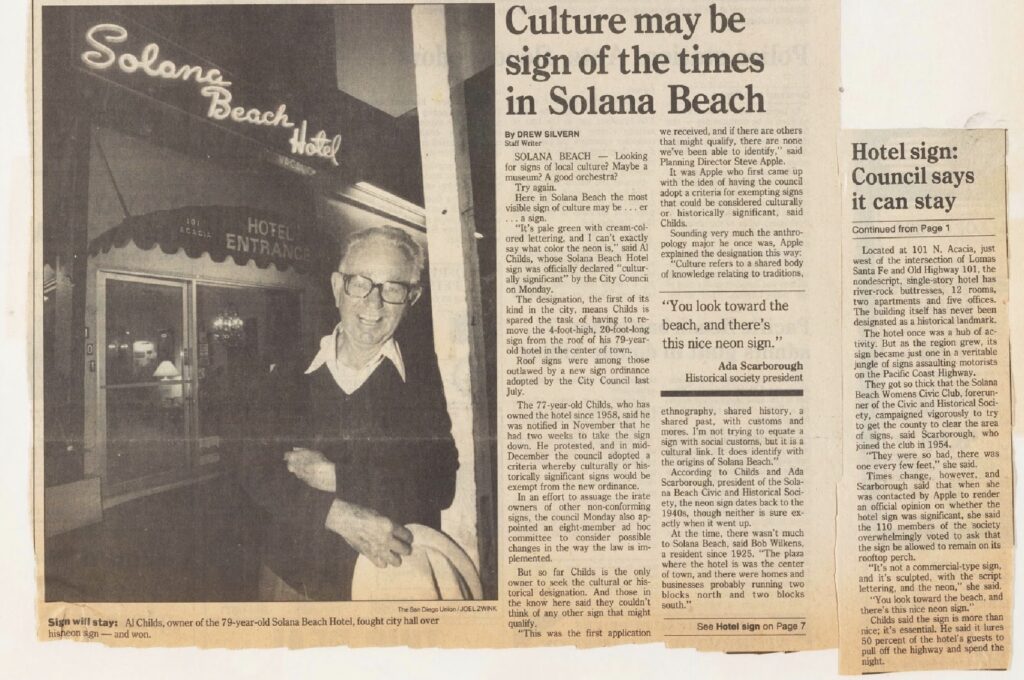 Childs’ was the first to win the cultural or historic designation, backed not only by committee support but also by a near unanimous vote by then 101-members of the Historical Society.

The “hotel” portion of the sign came down when the property was leased to the Chart House for corporate offices in 1993. In place of the word “Hotel” there is now a small sculpture created by Wenetta Childs from pieces of enameled copper that she did not use in her Sun sculpture. The tall Sun sculpture, installed in the Plaza median at Lomas Santa Fe/Highway 101 in 1967, stands as a visual representation of Solana Beach (“a sunny place”). And the pink neon “Solana Beach” remains, still luring visitors and sunset photographers to Fletcher Cove.